Horror awaits in the deep. However, in this adaptation of H.P. Lovecraft’s classic short story you are not the protagonist. You are madness. You are the rats in the walls.

Created by Alex Blechman for Techdirt's Gaming Like It’s 1924 game jam, and won in the category of Best Digital Game.

What a fun and genuinely hilarious little experience! I don't often find games that feature my music, but this is my new favourite. Great job!

I'm currently working my way through "The Complete Fiction of H.P. Lovecraft", so I read this story not long ago. I enjoyed seeing a different take on Lovecraftian horror, and even though it's a one-note joke, it didn't overstay its welcome in a short game like this. All told, I think you accomplished what you set out to do!

Having just finished the original story and the game this absolutely killed me - it's hilarious. I do wish there was some kind of straight horror version of this though, or something of the sort, because I never really thought about it until now but a Lovecraftian video game where you play as the monster/madness/etc is actually a SUPER cool concept - I've seen things like Carrion before, but they're always some kind of bloody slasher, I can't really think of one that's more psychological. It also seems like a cool idea for an RPGMaker as well, because a lot of them deal with succumbing or madness or some similar theme, but it would be cool to play AS the madness: like playing as the cat or house from The Witch's House, anything else from Yume Nikki, something where you play as the environment instead of the character - like The Shining but you play as The Overlook 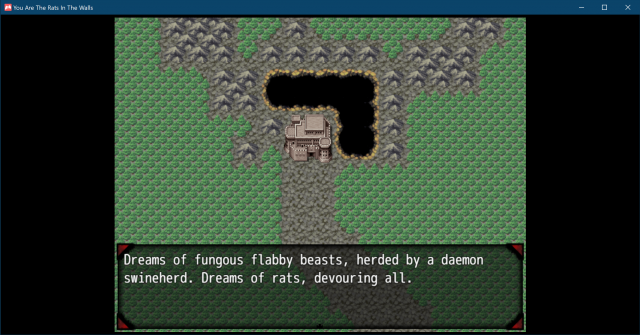 A great deal of the writing has modernized and rewritten. The introduction was the strongest and taken from Lovecraft. The dialogue between Delapore and Norrys comes off as two frat boys, going about their day. Surprise they weren't talking with their cellphones with all the lazy grammar. There are moments of reading two different styles, incorporation of Lovecraft's and the developer. Lazy indeed.

Unexpectedly, unlike other RPGMaker games, usually a galore of turn-based RPGs and Adventures. You herd Delapore to three separate essential areas to decrease his sanity so he can devour his friend. Inventive. The layout is simple, easy for navigating Delapore.

There is a tip system spoken by H. P. Tipcraft. Because, why not. They do not tip half are reminders. One of them is a proverbial dead horse that comes off passive-aggressive.

It is short. A play session is five to ten minutes long, not a lot of meat on the bones. In fairness, the game takes place near the end of the story.

I won't be addressing the graphics and sounds as they commonly use asset packs use by the RPGMaker community. That said, the music is annoying, and it repeats on a loop.

Credits included characters not presented in the game. That is: 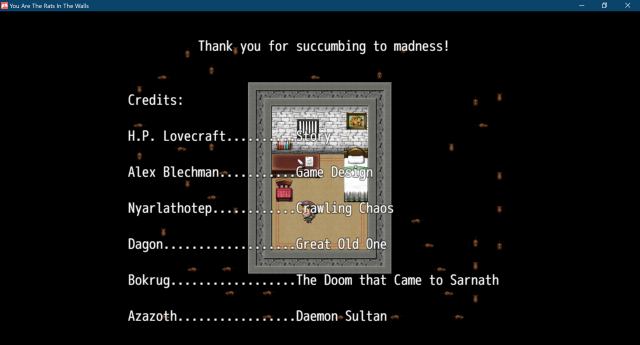 Is there a reasonable excuse? Probably not. But Avatar what about Nyarlathotep, he is in the story? Well, not in the game. The plot changed so much that there are skips and the paragraph mentioned Nyarlathotep is skipped. Funny thing is Rats in the Walls isn't a narrative-focused story.

The game drive home of not including racism in stories. Fair, we all agree. Yet, that racism context removed from Rats in the Walls, you don't accept a problem existing, more or less, running away from it. Now before, attacking me with shrieks and shouts. I shall provide a context of the cat. In Lovecraft's day, it was used to describe a pitch-black cat, an, unfortunately, syntax, wasn't Lovecraft intention as far it's been collected. The name of the cat, unfortunately as may be. There are no records of Lovecraft ever naming the cat. Most reiterations change the name, like Blackie or Black Tom. While leaving the plot and writing alone. Do you know why the cat is there in the story? Because of Lovecraft, it was a memento to his lost friend.

In short, a lazy attempt at addressing Lovecraft's racism, making self-aware jokes at itself. Devoid of Lovecraftian themeology and a soul into a herding game only a sheepdog would appreciate.

I can't recommend this game, despite how inventive the gameplay is not enough to save this from the rats.

You won best Digital Game! Congrats (it was well-deserved too, IMHO)!

Considering that you make high quality, award-winning works based on public domain material, you may be this generation's Walt Disney!

Maybe not, but I can dream!

This was funny small game that I really enjoyed playing, great job!

A great idea and fun little title, goes to show there's still a lot to be done with RPG Maker! Well done!

Without H.P. Tipcraft, I would be 2/3rds less insane than I am now! Fun! 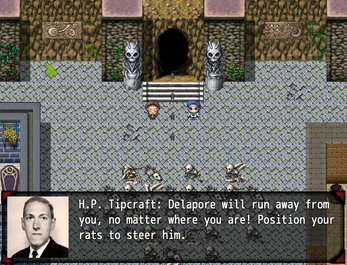 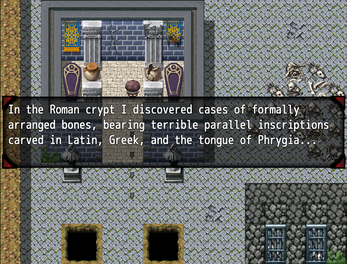